noun
The interaction or cooperation of two or more systems to produce a combined effect greater than the sum of their separate effects.

The strongest way to truly own your market is through the right combination of Digital and Traditional advertising to maximize your exposure. By integrating the RIGHT elements for your market, we convert more high-funnel shoppers into low-funnel buyers, saving you money and time while getting you the greatest benefits for your dollars. 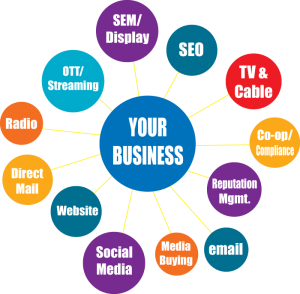 Being in business since 2002, Engelhardt & Partners Advertising has the experience and expertise to create exciting, efficient, integrated digital and traditional ad campaigns to help your business grow.

We have always been on the cutting-edge of new technology to keep our customers fully competitive. Specializing in BOTH the digital marketing space and traditional media, we are a full service agency that is highly-proficient in all aspects of advertising and traffic generation. Our strategy embraces the harmony of digital and traditional, applying them synergistically to maximize your exposure.